Watch the unboxing. (There's a cat!)

My first vinyl. From some sessions I recorded at Grant Avenue Studio in Hamilton, Ontario Canada in 1995. Thankfully the studio still has the tapes. And I do mean tapes: 2-inch reel-to-reel tape.

I reached out to Bob and Amy at Grant Avenue sometime early in lockdown 2020 and they helped me go through the recordings and were instrumental in helping me organise this release.

The sound is out-of-this world!

***
What do I remember of the Grant Avenue recording sessions? Plenty.

It was the dead of a Candian winter so lots of snow and ice. I flew into Toronto with two acoustic guitars and eight boxes of reel-to-reel tape, because it was cheaper to bring it in than buy it there. Customs officials scratched their head for hours over that one. I must be up to something.
The studio is in a converted house on, what else, Grant Avenue. It's the kind of studio that bands lock into for days on end, working from noon to midnight, losing track of night and day.
The musicians, all A-listers, played (some still do) with all the big names in the biz. I was definitely punching above my weight. We tracked most of the music live. A lot of it is just me with guitar and singing and Gary on percussion. One song was so delicate that we had to create him a makeshift shaker that wouldn't over-power the song. In the end it was brown rice in a film canister. Perfectly delicate. Try it. You'll see.
We recorded for two weeks straight, though I had to duck out for a couple of days to do gigs in the USA.
What I remember most, after the camaraderie (they were all good friends already but welcomed me into their tribe), is the sound. The reel-to-reel spins forever in my mind's eye, lit by the red and blue lights of the valve compressors. Nearby is a coffin-like box that houses the reverb, which sends the sound out into the ink black sky and back again. I never knew my acoustic guitar to have so much tone. I feel I'm on the edge of some discovery, some enlightenment...
And right about that time someone would run out of cigarettes, or someone would be gasping for a coffee. A couple of us would put on our coats and walk out into the Ontario night, each intake of breath ever so slightly painful and each exhale releasing shards of microscopic glass that catch the light and fall to the ground. DMs crunch the icy pavement as we walk to the nearby Ted Hortons. The normal world is just getting off work. The roads are busy with everyone driving home. The red brake lights reflecting off icy roads in tailbacks for as far as the eye can see. Automobile exhaust hangs in the frozen air. Someone's telling a joke but I miss the punchline. Lost in the wonder of it all. 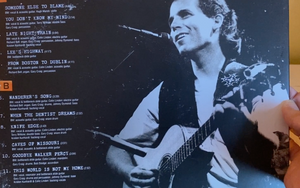