FROM BOSTON TO DUBLIN - 'How To Play'

Another song from the Grant Avenue Tapes 12-inch LP. From Boston To Dublin is in the ‘People’s Key’ (C), and features a folk-Americana alternating rhythm and my favourite inversion of G7. Have a look! 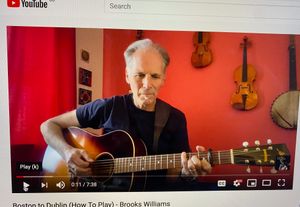 On a day much like today - sunny and hot - I picked up Boo Hewerdine from Exeter train Station. We were coming from opposite ends of the country for our gig that evening. And what a corker of an evening it was shaping up to be for a sold-out outdoor gig on the patio of a fabulous restaurant in the wilds of Devon.
The station was busy that day, so I couldn't get close to the front. Instead, I sort-of parked illegally to the side while Jo ran off to see if she could find Boo. I stayed with the car, pretending to rearranged the guitars and suitcases. Jo returned with Boo just as a police officer began to take issue with my parking liberties, so we jammed everything in the car and beat the retreat.
We got to the hotel and unpacked the car, looking forward to some down-time before having to go to the venue. We said we'd text each other in a couple hours. I instinctively patted my phone to show my agreement with the plan, only there was no phone in that pocket. Or the other one. Or my coat. Or my bag. Or, as it turns out, under the driver's seat, or on the floor in the backseat, or in the boot (or trunk). It must have fallen out at the station. No use driving all the way back there now. It would be snatched or smashed to bits. There simply wasn't time, or any use.
One more look, I said. The last-ditch effort. The ol' Hail Mary pass, so to speak. As I keep my ringer off most of the time I knew it was a long-shot, but Jo rang my phone anyway.
I followed a low, rumbled vibration from the front seat, over the back seat and into the boot (trunk). No phone, but still the buzzing. Overhead? I climbed out of the back and looked on the roof. And there it was, wedged in a little nook next to the back hatch. I can only think I must have put my phone on the roof of the car while I did my little improvised re-packing act at the train station.
I imagine its ride: from peacefully minding its own business on the roof of the car above the driver's side door into complete chaos, prompted by the intervention of a law officer. What followed was a hasty exit out of the station, through Exeter traffic, up onto the M5, down into Devon along smaller and smaller roads, until we arrived at the hotel at the end of the long farm track. Scary as hell. So totally unexpected. And exhilarating. To say nothing of the cost, I was saved a boat-load of hassle.
If such a thing could be taken as a sign, we were in for a great gig that night.